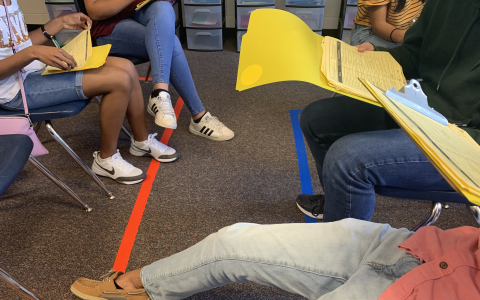 Maybe, just maybe, Vanilla Ice was channeling his inner teacher when he wrote the lyrics to Ice Ice Baby. And, maybe, just maybe, the Universe was trying to tell me something on my way home from work yesterday when it came on the radio. Regardless, it did, and it was immediately after one of the […]

Maybe, just maybe, Vanilla Ice was channeling his inner teacher when he wrote the lyrics to Ice Ice Baby. And, maybe, just maybe, the Universe was trying to tell me something on my way home from work yesterday when it came on the radio. Regardless, it did, and it was immediately after one of the most frustrating last blocks in recent memory that I haven’t yet repressed. Seriously – it. was. terrible. The eager students were frustrated with their peers; I, too, was frustrated with said peers; the lesson was completely derailed by nonstop, off-topic comments, questions, interruptions, and beyond sub-optimal conditions for any kind of valuable language input. I left feeling tired, annoyed, frustrated, and generally negative. On my way to teach my methods night class, I flipped on the radio to the exact moment where the downbeat drops in the opening seconds; it had just come on. I had been thinking about what my next steps where, logistically since now that class was behind as well as behaviorally since a handful of students had controlled the fate of the group when suddenly the lyric it, “Stop. Collaborate and listen!” and it dawned on me: “That’s exactly what I need to do.” I stopped replaying the annoying moments over and over in my head (harnessing the power of pause!) and went back to what I know has worked in the past and what I already have collaborated on to create — no need to reinvent the wheel. (Truth be told, I probably actually needed to hear, “Nice Nice Baby” because before I got my thoughts together, allllllll my teachery control-appreciating instincts said, “Retaliate! Get ’em! Storm the castle!” Hmmm, maybe I needed to hear “Let It Go”. I digress.) *deep breath*

Proficiency-based teaching has made me a better teacher, but I’d like to be more specific. Proficiency-based teaching has helped me not only see the big, long term picture, but also work toward it with level-appropriate materials that can naturally differentiate and scaffold for the students in front of me. As a novice-level teacher, the target is always Intermediate (and beyond!), and when I was frustrated, disorganized, overwhelmed, under-planned, or all of the above, I never used to think, “But, your language goals! How will you acquire and use X, Y, and Z?” Now, coupled with maturity and more experience, I can zoom out and see beyond the behavior or the missing task and think, “But, really… you have a Can-Do statement we’re working on and your assessment is in one week. Hello?!” when students aren’t holding up their end of the deal.

Moreover, proficiency-based teaching has improved my planning. Yesterday, circa 1:30pm, when I was d-o-n-e, realizing I was in the throes of DEVOLSON, my instinct was, “That’s it, we’re done, and now we’re going to [insert really mundane, pointless task here, that inevitably I’ll say I’m taking up only to ignore it and undermine my own authority],” i.e. using a group punishment that 1) wastes the time of 30 kids when only five were wasting the group’s time, and 2) undermines my authority as the person to keep his/her cool in moments of distress. (I’m a good teacher, I swear; hear me out.) Proficiency-based teaching is naturally reflective and collaborative; with the aforementioned big picture and target(s) and lots of collaboration both within my department and with teachers all over, I have been on a roll getting all of the Unit’s resources together in one, cohesive, somewhat orderly .PDF to give to students at the beginning of the Unit, stapled and hole-punched. Ta-daaaaaa! Therefore, when I looked around and realized what we were doing wasn’t working, and what we were about to do wouldn’t either, I was able to (somewhat) calmly say, “That’s it, we’re done,” (I couldn’t not have a dramatic statement, c’mon!) “we’re moving on to something that’s a little more challenging since it seems like we are done here.” I very obviously scrolled past the interactive game slides, now with the class’ full attention, and settled on screenshots of a paper that 1) was probably i+10 instead of i+1, and 2) they already had in their materials. A younger me would’ve been fumbling for some worksheets that, let’s be honest, I didn’t already have copied, while mumbling retaliating comments because Plan B is usually to get a Plan B, in the moment. But, because I have collaborated in creating, purchasing, and developing different materials, I had lots of things to choose from that students could do independently. They groaned, I ignored it, and we all moved on. Thankfully the bell rang, I left for night class, and then turned on the radio.

After pausing and really considering why last block was such a disaster, I came up with the following plan: remove the handful of students who 1) had served as a distraction, and 2) didn’t turn in the formative writing that they were to complete and turn in. (Yes, you read that right, not only were they disruptive to the learning environment, but they had also done zero work. Ugh.) The product of this reflection was: 1) pre-written Media Center passes for said students to go there and complete the work, 2) said work: one Gimkit assignment, an EdPuzzle video (in a new class called “Remediation”, a practice exercise they were to complete and print out, and 3) a to-do list to guide them through the WHY and the WHAT. I posted all of this to our public class calendar that is easily accessible to students through my school site (scroll down) or eClass, our district platform, meaning they could go right to the Media Center, get a computer, and everything was there waiting for them. Boom!

As last block began today, I was ready. I met them at the doorway and greeted them as usual. Then, I handed them their list, pass, and instructions (stapled together), quickly explained, “I didn’t get your completed writing from yesterday’s class, and I’m afraid that you aren’t going to be ready for Friday’s assessment or next Friday’s Unit assessment(s). Drop your phone off with me, and come back when you’re done.” Mouths agape, they did as instructed, and about an hour later came back 1) with the work completed, 2) doing not too badly (80% accuracy on the Gimkit assignment and about the same on the EdPuzzle video, and 3) perfectly calm, albeit a little bit sad as they re-entered and looked around to see us carrying on with our learning experience (read: intentionally super-fun game) without them. Frankly, they looked sad that they had missed out and it dawned on me: proficiency-based language teaching converts in-class seat time into an experience ideally one that is missed and not one that’s inconsequential. They had missed valuable input the day before and I had not upheld my end of the environment bargain which, as Grant Boulanger says, is to create optimum classroom conditions for language acquisition. It was, if I do say so myself, a model lesson. We went through all three modes (interpretive, interpersonal, presentational) in usual #everydayIPA fashion, laughed together, and caught up to the other classes.

Because I focused on the language opportunities they had missed out on yesterday and not how their behavior made me feel, I was able to react accordingly (instead of retaliating). Because I share with others and take advantage of their sharing, I had ideas and materials already prepared so that I didn’t have to create something (which can foster resentment and go back to focusing on the behavior). And, because I work in a place with highly-collaborative people, I knew I had the support of our (award-winning!) Media Center Team in sending a few students down to stay safe and on task. Proficiency-based language teaching reminds me that I am a power-with teacher, not power-over. Fellow classroom practitioners will tell you that full-class punishments don’t work and zeroes don’t motivate; eventually, we must bring the natural consequences back to the learning and the material missed. The ‘punishment’ (which really isn’t one at all) then becomes still having to do X, Y, and Z, not doing something else that’s punitive at best. Tonight, and tomorrow during my planning, I am going to go back to the aforementioned Gimkit and EdPuzzle assignments, look at what they missed, and draft up another note that will outline how they did and what their next steps are (first and foremost: completing the formative writing that they didn’t do in the first place).

I am thankful every day for a lot of things — today, I am most thankful for proficiency-based language teaching that allows me to sustain joy and focus back on the optimistic, positive, additive aspect of language: happy, joyful, purposeful acquisition.

(Interested in the to-do list? Check out our department’s forms here. There are lots of gems including a missing substitute assignment form, a retake request, student to-do list samples, and more. Take, share, use!)